Conformation of the Gypsy Horse

Conformation of the Gypsy Horse Admin 2017-07-05T18:01:16+00:00
Below we’ve covered a few of the high points of Gypsy conformation. At some later point, we’d like to go into some of the more abstruse angles and points of conformation. 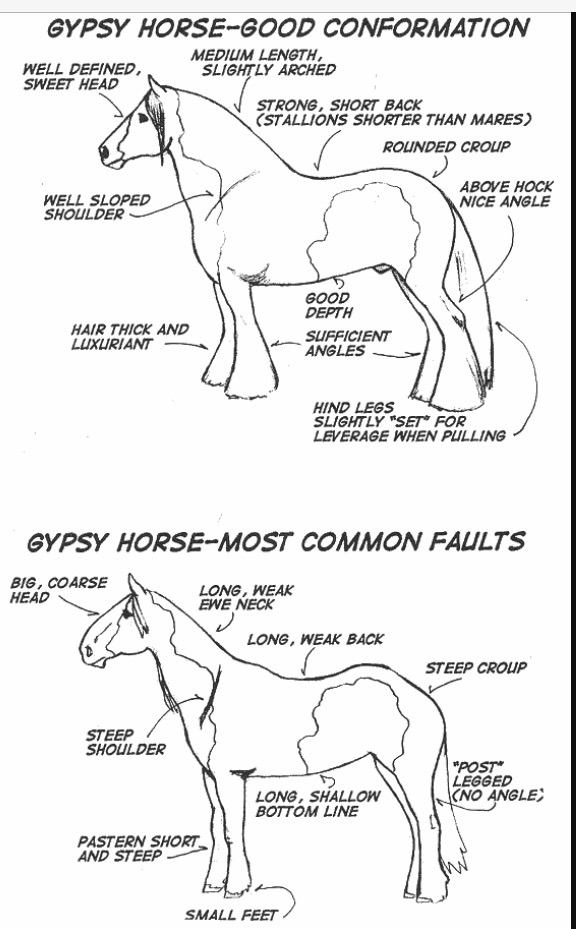 This drawing was produced by Black Forest Shires & Gypsy Horses and is still one of the best presentations of a breed standard that we’ve seen.

Below we look at the specific characteristics that make the breed illustrated by photos of Gypsies.

The GH was primarily bred, by anecdote, from the Shire, the Clydesdale, and the Dales Pony. The first two are, of course, draft horses, and the latter is a draft pony. All are feathered breeds. A relative young breed, the GH has not yet become homogenized, and one aspect of the breed where this is most noticeable is the head, which can vary from a refined, pony head to a somewhat coarser Shire or Clyde head. Also, different breeders overseas have different styles, and these styles themselves are still evolving. Black Forest Shires & Gypsy Horses imported from three sourxes overseas–Michael Vine, Stevie Downs, and Sid Harker. These three and their families bred horses which came to this country and acquired horses from other breeders in their areas.

The Vine horses, come from the south of England in Kent. With particularly refined heads, these horses are toward the “pony” end of the spectrum and, at the time of their importation, were among the smaller Gypsies. The Vine family and the breeders in southeast England seem to be breeding smaller and smaller. 10-hand horses are not unheard of nowadays, and this trend does not seem to have yet exhausted itself.

Part of what makes good conformation on a Gypsy Horse applies to all horses. We’ll touch on some of that but for the most part stick to GH specifics.

Feathering is the profuse hair starting at the knee and hock and growing down to flow over the front of the hooves. Feather is always referred to in the singular, never as “feathers.” More feather is considered superior to less, and nonkinky hair is considered inferior to straight, silky hair.

An important characteristic of Gypsies is heavy, flat bone.

Wide variability in head shape exist within the breed. The Gypsy Horse is bred from draft horses (the Shire and Clydesdale) and draft ponies (the Dales Pony in particular). Roman noses are considered a fault, but a less refined draft horse head is accepted and preferred by some.

In addition, other breeds are almost certainly in the breed’s background. In his book, Coloured Horse and Pony, Edward Hart also reports that the Romanichal breeders initially introduced Hackney breeding to increase action at the trot. However, feather and bone were lost with the lighter Hackney, and so the breeders turned to the Section D Welsh Pony. The refined head found on some Gypsies could have originated there, although any sort of breeding, including Arabian, could be the GH’s background.

We’ve seen some Gypsies whose backs were so short that we doubt a saddle could comfortably fit on it. We consider that a fault, although the overseas breeders might breed such a horse to others with somewhat longer backs.

The Gypsy is famed for its “apple rump;”

The hock set of a Gypsy is one of its most distinctive characteristics. It is where the hind legs appear to be turned out slightly. This is the horse’s hock set. It’s not equivalent to being cow hocked, where not only do the hooves point outward but the hocks point inward. A cow hocked horse’s hind legs move outward and upward, and the cannon bones don’t appear parallel.

We commented that this degree of hock set is the distinguishing feature of the Gypsy. This degree is not as extreme as that found in other drafts, the Shire for instance, but is more extreme than that found in such nondrafts as Arabians or Quarter Horses.

Any equine color is acceptable in the Gypsy Horse, and Silver Feather Gypsies has had horses representing many of them. Black-based horses are the best known and seem to be the most requested, especially by new owners. In addition, some Gypsies seem more resistant to lightening by exposure to sun.

A tobiano pattern is referred to as paint or spotted. In tobiano, white crosses the spine, and it’s been compared to white paint’s being dribbled over the horse’s back to run down his sides.

Any color of horse can display a tobiano pattern. Unlike blue roans, true grays fade with age.

The Gypsy is marked by his wonderful personality. Gypsies are less prone to spook than such breeds as Arabians or Thoroughbreds. They are, nonetheless, horses and so are as unpredictable as horses of any other breed.

Like the Arabian, the Gypsy Horse is something of a jack of all trades. Unlike the Thoroughbred, which was bred to race, he is good at almost any equestrian sport but doesn’t excel at any one.